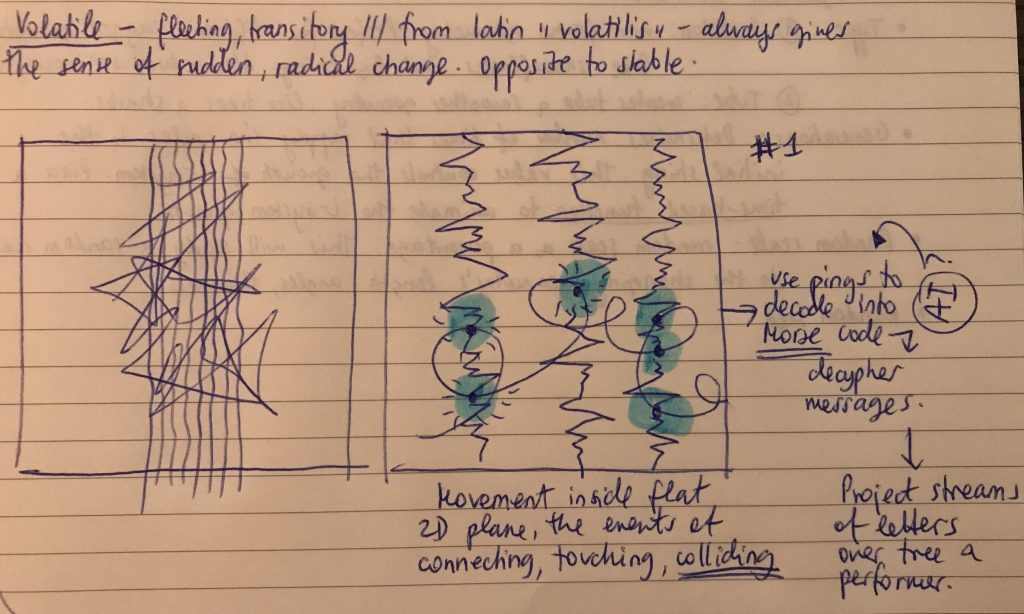 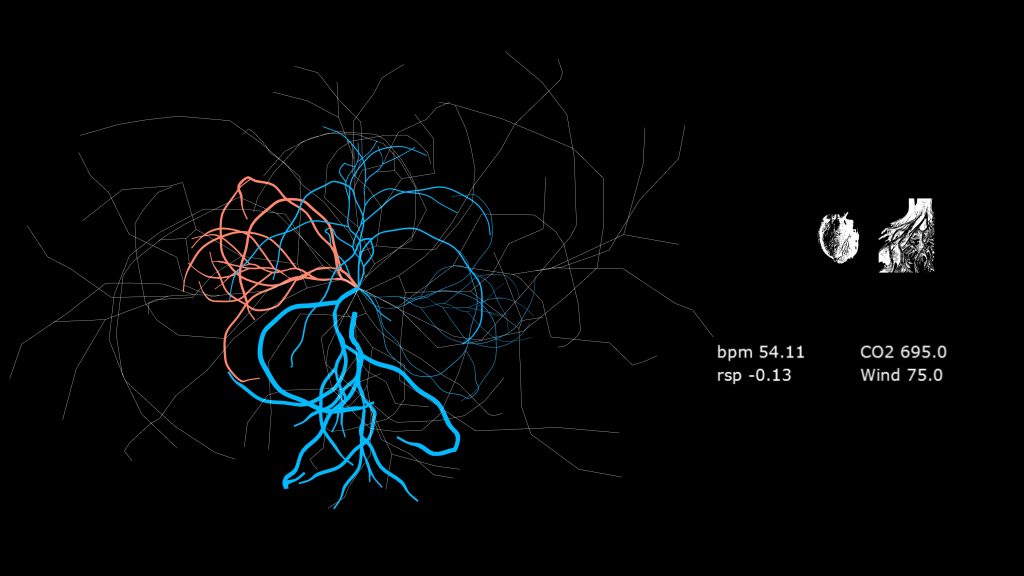 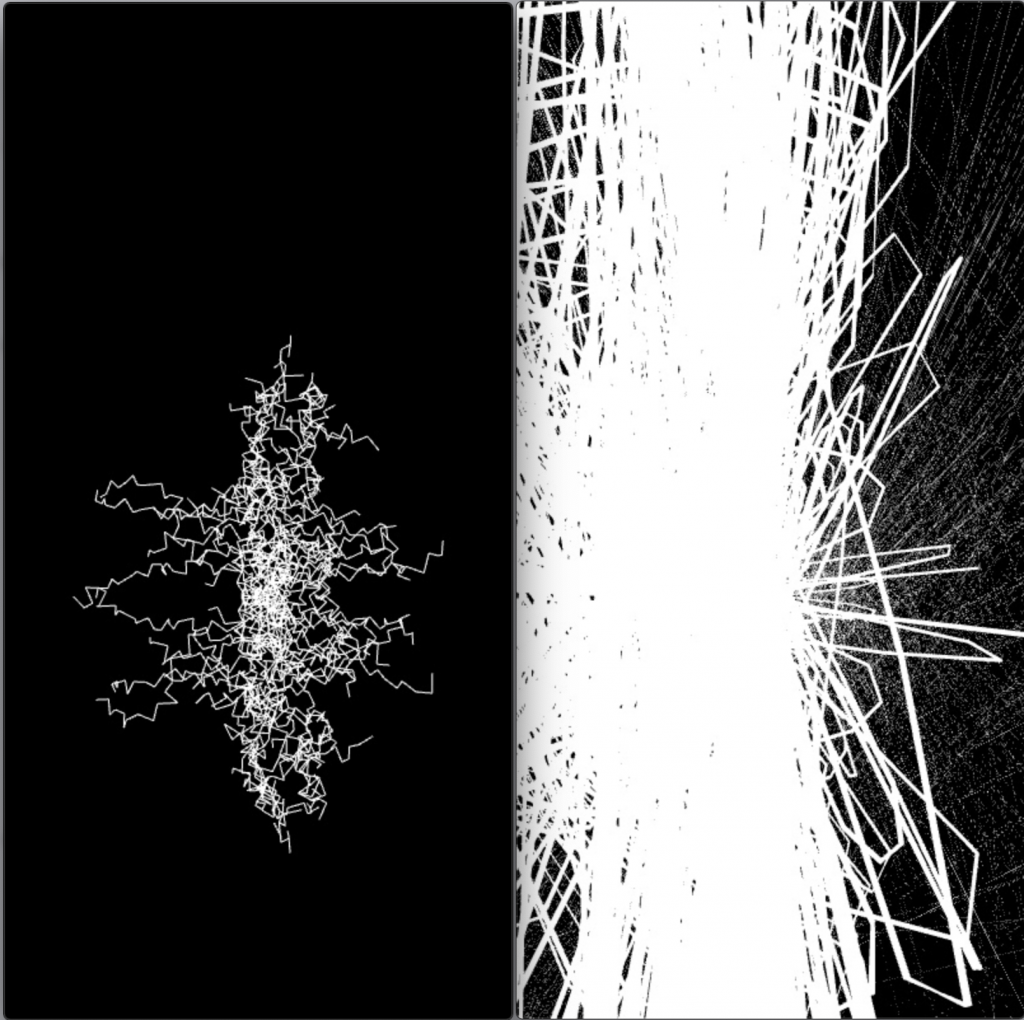 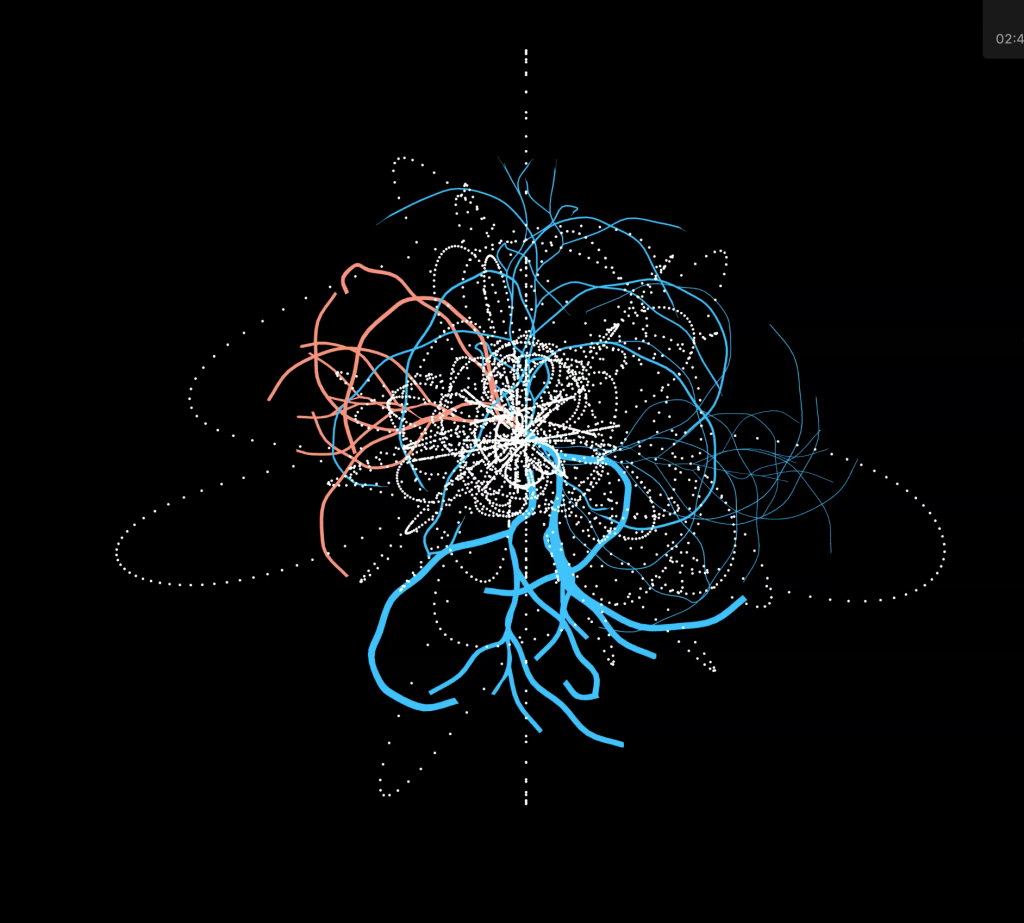 In Volatile Bodies, two biologically active forms (a tree and a human body) are translated through signals into digital expressions while sharing the same space of temporary presence. Together, they entangle and weave a new form of hybridity, a language, a remote embodied connection, pulsing and driven by living data streams. The artwork explores more profound and volatile chemistries of different lifeforms entering the alternative space of encounter while exchanging signals unaware of each other. It is a conversation that is not spoken but lived and manifested from the core of the bodies and their living environments.

Volatile Bodies is an artwork that explores data mapping and abstracting information in alternative forms for deeper inspection and appreciation. This piece gathers two separate data streams in singular 3-dimensional cartesian space and maps them into different geometric bodies. I am connecting to an online cloud service called shiftr.io that publishes data in real-time. One of such instances is poetryAI, managed by Prof. Jane Tingley, an IoT prototyping platform that populates data collected from the natural environment. I am also using hardware devices and interfaces connected to my body that gathers and sends bio-physiological data from my heart for further analysis. The esp32 hardware interface receives data from BIOPAC sensor MP40. This data is further analysed, converted, and distributed by PACIS2 software developed by Prof. Mark-David Hosale and biomedical designer, developer and artist Alan Macy. Multiple streams of different biometric data are readily implemented in interactive sculpture as live variables that influence and drive its behaviour.

Why ‘volatile’? In creating this work, I imagined the model of our co-existence with other species and habitats. It is not always a perfect union and equal balance, but more like complex co-habituation. I think ‘volatile’ characterises these reactions when we face one another. Each system with its own intricate and unique inner architecture tends to battle for its existence and situate itself by connecting with the outside world and neighbouring systems, resulting in some form of metamorphosis or complete extinction. I wanted to display this perfect storm of strangers finding each other in the same space, habituating and intertwining amongst each other under different circumstances. The human heart meets with wind and Carbon dioxide inside a multiple-coordinate system and in fluctuating space-time, locked inside generative bodies composed of points and lines that are also systems in their specific expressive domains. The structure for these bodies is constructed using L-System algorithms, a type of grammar that allows drawing and building stringed objects; trees would be one of such kinds, besides other forms of growth and iterations. In the end, what I was looking for was not the complexity of the form, rather the movement and dance that these multiple instances were exhibiting. A behaviour, if you may also call that, nature, a life principle, engine, source of anima and what enlivens particles of this whole universe. I wanted to create a living and breathing pattern that becomes an expression of other complex systems when removed from the density of physical space—a narrow and close introspection of things that we don’t see nor hear with our human sensory apparatuses. The sound plays a crucial part to give data a voice by bringing wind and heartbeat into the perceptual zone for our ears to capture the elusive natures of these phenomena.

Final video of the prototype.

This prototype project was developed with support from